“What do we live for, if it is not to make life less difficult for each other?” ― George Eliot
FOLLOW ME
PREV
Sneak Peek: Mary & Josh 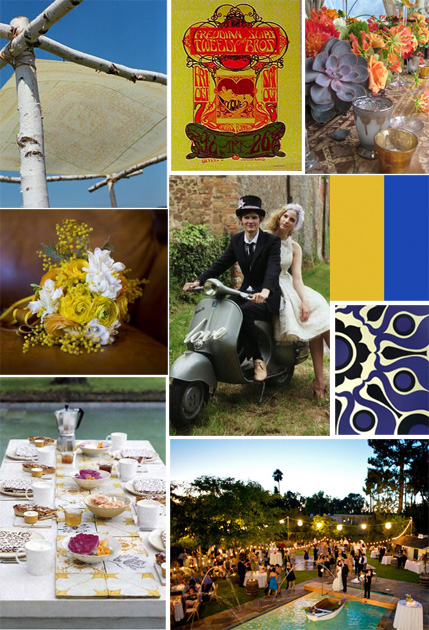 The couple wanted a very funky, retro inspired party, rather than a traditional wedding reception. Seating, would be small cocktail tables and dinner would be four food stations served on small plates. They knew off the bat that they wanted their photos taken on their vespas and that large light bulb strands would be strung overhead. They also knew they wanted paisley featured throughout the design. Finding the right paisley proved to the toughest part of the design. I found one option that would work, but the fabric company had stopped making that design. I even looked in New York when I was there for the B-List and had no luck finding the right paisley. Finally, in May I went once again to Michael Levine’s in downtown Los Angeles and found the perfect paisley.

The paisley incorporated their colors, cobalt blue and goldenrod yellow, and had little funky 60’s style flowers throughout the pattern. I put in my order for 30 yards of fabric and had the fabric shipped to my linen vendor to make runners for the cocktail tables, cake table, and food stations. I took a swatch of the  paisley to the cake vendor, Rosebuds, and they were able to pipe the pattern onto their cake. I also sent the fabric to the florist, Collage, so she could use it as a reference for the paisley pattern of rose petals I wanted down the aisle. Once the fabric was found the rest of the details came almost immediately.