“What do we live for, if it is not to make life less difficult for each other?” ― George Eliot
FOLLOW ME
PREV
Made in Italy- Part IV

Made in Italy- Part V

Guest blogs
NEXT
Thank you!

Just then, Valentina called and was running late, so Giuseppe thought for a second and then motioned for us to follow him.  We walked through a door, and were suddenly amidst many beautiful rolls of fabric, and glamorous, half-sewn dresses–his workshop!  He pinned my thank-you card to the bulletin board by his desk, showed me his original sketches and pointed to the works-in-progress.  Then, as if something caught his attention, he sat down at his computer and began printing something.  He snatched the paper out of the printer and almost handed it to me, but then he took it back, grasp ed a fat pen, and began to draw.  What he had printed was a copy of his original sketch for my dress, and what he handed to me was a real drawing of my own dress, with the changes he had made to it.  I was shaking and starting to cry and accidently knocked over some rolls of fabric as I leaned over to kiss his cheek in thanks.

Finally, Valentina arrived and Giuseppe decided that we should all go get a glass of wine and pizza before I leave.  We returned to the little cafe where everything began, and had a good time talking (as much as possible), eating and sipping Bergamescha wine together. 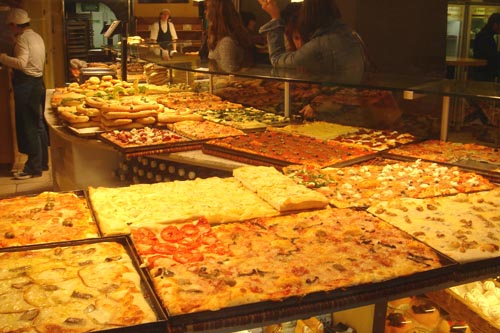 When our wine glasses were empty, we went back to the boutique, and Giuseppe placed his note and drawing in with the dress and zipped up the bag. Then he picked up his masterpiece, laid it across both arms, and carried it down the block and around the corner to the car they had arranged to drive us back to our bed and breakfast.  He placed the dress gingerly in the car, and turned to me to say goodbye.  I hugged him and he gave me the classic Italian 3 kisses on the cheeks goodbye.  I got in the car with my mom, and we both turned to wave goodbye to Giuseppe Papini, who smiled warmly and waved back.

After they dropped us off, I broke down and cried for several hours.  It was just that good.

It made me hungry…

Fabulous dress and great story of your adventure to get it.
Keith & Val.

Made in Italy- Part IV