“What do we live for, if it is not to make life less difficult for each other?” ― George Eliot
FOLLOW ME
PREV
Made in Italy- Part III

Made in Italy- Part IV

Guest blogs
NEXT
Made in Italy- Part V

When the sample fitting was finished, the girls measured me every which way, and then sent us off with many recommendations for shopping and food.  We were to come back the day after next, in the morning, for the first real fitting.  Meanwhile, the dress would be made from scratch. 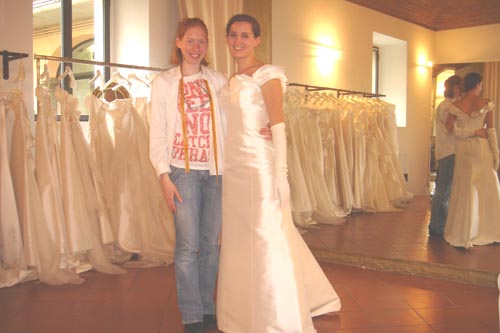 The next day while they worked on the dress, my mom and I we wandered through every shop, passage way, park, museum, ate terrific food, and took in the panoramic views from Citta Alta, the city’s crown jewel.  The Citta Alta is the oldest part of Bergamo, with ancient city walls and Venetian checkered buildings; it sits high on the hill overlooking the plain of Lombard and was absolutely charming.

The following day, I went to Giuseppe Papini’s for both the first and final fitting of my actual dress; I was shocked at the precision and quality with which the dress had been made–and in only one day!  It was flawless.  Only a few final touches, such as the addition of “something blue” to the inside of the dress, and Giuseppe’s trademark ribbon down the back, needed to be added; the dress would be entirely finished by the following afternoon, when I was to return to retrieve it. 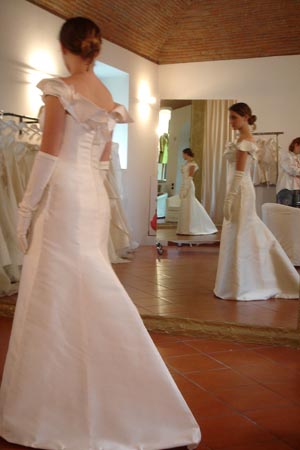 At 5 o’clock the next day, I stood at the door to the boutique, and rang the buzzer one last time.  In response, it was not Erica, the seamstress, who carried over my dress this time, but Giuseppe Papini.  He re-checked the dress and zipped it up in is bag.  I had written thank you cards and bought flowers for Valentina and Erica, and had spent a lot of time writing and re-writing my thank you card to Giuseppe Papini.  I handed it to him.  He was kind enough to attempt reading it, but had to hand it to an intern who translated it to him.  He thanked me and then ran in the back and returned with a booklet of his dresses.  He pulled out a pen, flipped to the page that displayed my dress, and wrote me a note back in Italian.

[Join us tomorrow for the conclusion.]

Ah!! I loved reading this story as much as I loved hearing it! You are so amazing Wendy!

What an amazing adventure!! I LOVE ITALY!! Wishing you a happily ever after : )

The “three Wendy’s in the mirror” — bella!

hehe.. stoked we get to see a picture of the dress, I hope we get to see a shot from the wedding day too!!! What a fun and wonderful story, can’t wait to read the ending!

Made in Italy- Part III

Made in Italy- Part V