“What do we live for, if it is not to make life less difficult for each other?” ― George Eliot
FOLLOW ME
PREV
Made in Italy- Part I

Made in Italy- Part II 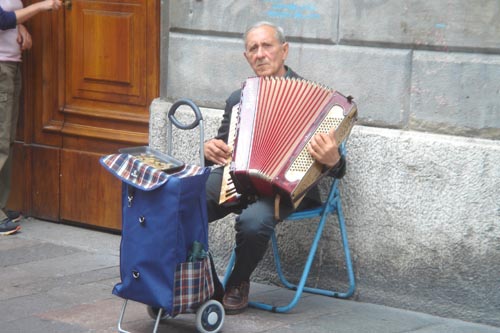 My mom and I figured out that we could take a bus from the airport to Milan, and then take a train to Bergamo.  Unfortunately, our bus ride was an hour longer than expected, was stuffy, and by the time we got to the bus depot, we were nearly out of oxygen. Furthermore, I was starting to dwindle on little sleep and airplane food.  My mom found a food stand and offered to get me something to eat.  NO ONE SPOKE ENGLISH.  I think she said that we were Americans, so they ended up giving us americanos instead of food. Nevertheless, the caffeine was temporarily good, and we figured out how to get ourselves on the correct train at Stazione Centrale, the beautiful, industrial, Mussolini-looking train station in Milan.

Now, I must warn about train conductors in Italy.  DO NOT say that you are a tourist, or they will demand a “tourist fee” for which they set any amount.  Just shake your head “no” if they ask you anything.

Needless to say, our train ride was less than pleasant, not only due to the slimy conductor, but also from the americano that was eating away at my empty stomach and making me nauseous.  I would look outside to raise my spirits, but it was only dreary outside, and I was surprised at how many towns we passed that looked like war had come to them.

When we arrived at Bergamo, however, what I saw out the window was a beautiful, gleaming, old city sitting on a hill at the base of the Swiss Alps.  Bergamo was once a stronghold of the Venetians, and is today a jewel to visit even for other Italians.

Once the train stopped, I grabbed the Google map my mom had printed of Bergamo, and immediately started for Giuseppe Papini’s boutique.  We were dragging our luggage and my mom was getting annoyed with me for walking too fast.  She wanted to go to our B&B, or at least get something to eat.  NO, I was on a MISSION FROM GOD! I told her, and nothing was going to stop me, now that I was so close to actualizing this dream! 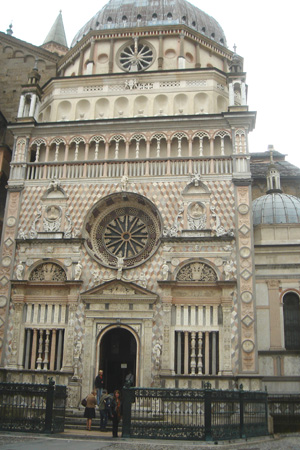 I turned up Via T. Tasso so fast that my suitcase reeled on one wheel and my mom was yelling at me to slow down.  The narrow and charming street was paved of perfectly cut, flat grey stone.  I passed cute little stores and then saw the plaque that read, “Giuseppe Papini” and rang the bell. 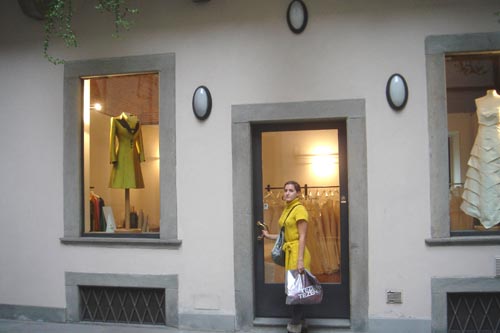 I had told Valentina, an assistant at Giuseppe Papini with whom I had corresponded via email, that we would be arriving around 12:00pm.  It was now 1:30pm, but she had said very sweetly, “even if you are late, I will be waiting”.   I hoped that she hadn’t given up.  An older Italian man pointed up the adjacent cobbled alley, and said, “Giuseppe Papini”.  We nimbly wheeled our suitcases up the alley and stopped, dropped jaw, in front of a window that housed a gorgeous, modern tiered wedding gown.  I peered into the boutique, at all the dresses, and could not believe my eyes.  I was actually THERE.

[Join us tomorrow for part three…]

Wendy!! Oh my GOSH! I read this blog all the time and i was so surprised to see you on it! and so excited for you!!!
it sounds like you are having quite an incredible wedding adventure! can’t wait to read more!
p.s.- you look beautiful!

Made in Italy- Part I